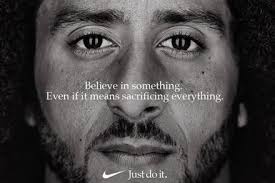 Nike released its 30th year anniversary campaign ad on September 5, 2018. This ad used Kaepernick as the head of the campaign, as well Serena Williams and Lebron James. Soon after many Nike customers threaten to boycott Nike products, some even went as far as burning or cutting their Nike gear.

Also, President Trump tweeted that Nike was going to suffer major economic losses due to this ad, and that they should of thought about this better before releasing their 30th year campaign.[13]