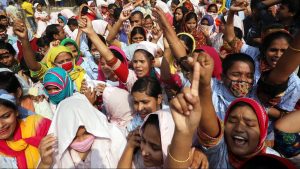 Following the collapse of the Rana Plaza, thousands of garment workers went to the streets of Dhaka to protest. Many of the protesters demanded the death penalty for Sohel Rana, the owner of the building, as well as the owners of the garment factories on the upper floors. More than 150 vehicles were damaged, and protesters burned two factories.